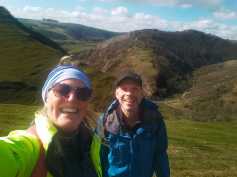 Martin and Jenny out walking in Derbyshire

The Derby Haven Fellowship formed in late September 2021 when Jenny followed her call from God to move from Scotland to Derby, to begin a new off-shoot of the Haven plant in East Kilbride.

In the beginning, it was just Martin & Jenny learning the very basics of how the early church met, which was simply to "do life" with one another, be devoted to the prayers, the apostle's teaching, the fellowship and to the breaking of bread (Acts 2:42). It formed the basis of what has now become a fellowship of 5 seven months later. 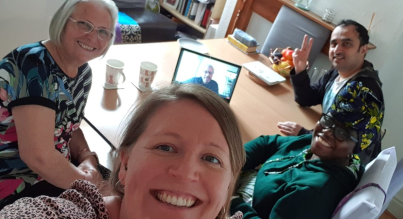 In a very natural way, we have let God steer the wheel for this, because who better to be in control. There is no fixed order or format, other than we get together every Sunday, most often over a meal in one of our houses. We share how God is speaking to us in our daily lives through the Word of God and through our testimonies of putting this into action; we often have a time of praise and worship and always pray together; and at times we will share in communion. God has shaped us as we have developed a greater love and affection for God our Saviour and for one another, by revealing through His grace the true meaning of fellowship; to be devoted to the Word of God, the discipling of each other and of those we meet. As well as our gathering on Sundays, we also have times where we meet independently or as a whole group to go for walks or have a coffee together.

If you are nearby and either enjoy such a Christian fellowship or have never encountered one before then we’d love to hear from you. Why not give it a  one-off try without any obligation? You will be able to walk in close fellowship with brothers and sisters who journey alongside you day to day, and encourage the giftings God has bestowed upon you. You will benefit from being accountable to someone else. Do get in touch for a coffee and chat so we can tell you more about our fellowship and see whether you’d like to taste and see.